Posted on October 30, 2015 by crowdedbookshelf

I hadn’t given much thought to the impact or aftermath of a pandemic until I read Station Eleven. In Station Eleven a virus, the “Georgia Flu,” kills the majority of the world’s population within a few days. There’s no explanation, it just happened. Only pockets of human life remain. Author Emily St. John Mandel broaches the story in a creative way by intersecting multiple characters that are connected to one person, a Shakespearean actor named Arthur. In the first few pages, Arthur dies of a heart attack on stage while playing King Lear. At the same time, the Georgia Flu is taking hold and within days everything has changed forever. Mandel toggles in time between pre-pandemic days and twenty years after. The pandemic is referred to as “the collapse” of civilization where there is no electricity, no food and no running water. Roads are jammed with cars, inside are remnants of humans. All homes and buildings ransacked and deteriorating. Survivors travel by foot and some think they are the world’s sole survivor until one day they see footprints in the snow. Mandel paints a grim scene.

One character, Kirsten, is a child actor who made appearances in King Lear with Arthur and was witness to his heart attack. We get to know Kirsten twenty years after the collapse. She is in her late twenties and a Shakespearean actress in the Traveling Symphony, a band of twenty who perform symphonies and plays as they travel from settlement to settlement. Kirsten is obsessed with all things Arthur, especially a comic-book series written by Arthur’s ex-wife, Miranda.  The comic book features a character, Dr. Eleven, a physicist who lives on a space station, Station Eleven, after escaping an alien takeover of Earth. There is a parallel universe here that Kirsten understands but is never really developed.  Kirsten is tough and self-sufficient. She defends herself and others against The Prophet who is a cult leader taking pre-teen brides and training young boys to kill.

Another character is Clark who was Arthur’s best friend. The pandemic leaves Clark stranded in an airport where he lives for the rest of his life while building a Museum of Civilization that showcases pre-pandemic items such as cell phones, computers and credit cards. The Traveling Symphony is making its way to the airport which, after twenty years, has become a settlement of over 300 people. Clark and Kirsten meet but then the book ends.  Did they know that Arthur was a common connection between them?  I’m left with questions.  Who was that Prophet anyway? 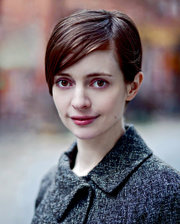 As Mandel skillfully developed each of the characters in connection to Arthur, I had an expectation of a climactic event, a coming together. The end left me suspended.  Perhaps there’s a sequel? Regardless, I enjoyed reading this book, it’s a real page turner and perfect for a book club discussion.

See what the New York Times had to say about Station Eleven.